I want to drink good beer, but when I get into the beer aisle there are so many choices it’s hard to choose a good one.  Either I buy the same old thing (Blue Moon) or I end up gravitating to the beers that have the most eye catching labels or the coolest names.  Just last week I bought two six packs of Mexican craft beer from Los Muertos, a Hefeweizen and an IPA, because of the cool death theme they have going on (see attached picture, aren’t they so cool).  The problem is that when I went to drink the beer it was pretty, meh.  How do I make better choices in the beer store? 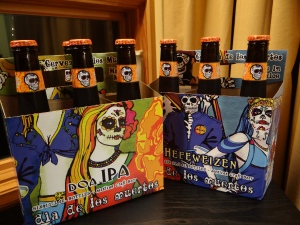 Mexican Hefeweizen sounds like an iffy bet under the best of circumstances. My first piece of advice would be to read all of the information material on this blog site!  If you had read “Wheat beers explained” this could have all been avoided.  Most of the beer reviews posted on this site are read by very few people (some by no people), but if you read them they will point you in the right direction, so head over to that part of the site. The next thing is to try and decide what styles you like.  The only way to do that is to try different styles and either remember or keep notes on the ones you like and the ones you don’t. Chances are if you don’t like one imperial stout you won’t like most of the others (there are some exceptions to this generalization).

Once you have some idea of the styles you like check out the ratings for that style on a community beer rating site such as Beer Advocate (http://beeradvocate.com/) or Rate Beer (http://www.ratebeer.com/).  Both sites sort beer by style, so you can see the ratings for a given beer and compare it with others in the same style category.  Ratings don’t tell the whole story, but if a beer is consistently rated either very high or very low by the general public in my experience that means something.  I often consult Beer Advocate when trying to make a choice in the beer aisle or at the bar.  Stores that sell singles are also quite helpful because you can try one beer for $2-3 and see if you want more (in Columbus Weiland’s Market is the best place I know to get singles).  If you buy a 6-pack and don’t like it, not only have you wasted your money but you’ve got to drink the other five beers. Finally treat it like an adventure, but if you’re buying Mexican Hefeweizen’s and IPAs I don’t think I have to tell you that.  Might I suggest a Laotian Lambic or a Polynesian Porter for your next foray into the marketplace.