Sometimes people ask me what is the best thing about writing a beer blog?  It’s hard to find a good argument in the numbers. Earnings to date = $0.  Beers gifted to me for to review = 0.  Guest appearances in media outlets = 0.  Special access to limited releases = not yet.  So far I’d have to say the biggest perk is that it gives me an excuse to try new beers, visit new breweries, and meet new people.  In that vein here are the top six beers that I first tried in 2013.  Only two are actually new to the world in 2013.  At least half of the list I would probably not have come across were it not for writing this blog.  They are all either seasonal releases or beers not sold in Ohio, which is a little unfortunate, but that’s a big part of the reason why 2013 is the first time I got my hands on them.  For all but one of the beers you can access a full review by clicking on the name of the beer.

1.  Seizeon Bretta by Logsdon (Saison) – A farmhouse ale from a real farmhouse brewery, Logsdon, which is located near Hood River, Oregon.   This beer, which I picked up on my summer vacation, is made with Brettanomyces yeast that gives it that delicious, crisp Brett funkiness.  It is bottle conditioned and a little organic pear juice is added on bottling to give the yeasts something to munch on while it ages.  The fruitiness is balanced masterfully by a restrained acidity, while the Brett adds a layer of complexity.  Orval meets a geuze and they have a beautiful child named Seizoen Bretta.  This was my favorite beer of 2013.  Unfortunately it is not widely available outside of Oregon and Washington. 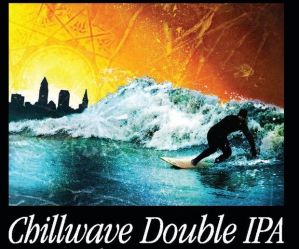 2.  Alchemy Hour by Great Lakes (Double IPA) – This is a late winter/early spring seasonal DIPA release from Great Lakes that made its debut in 2013.  Made with Mosaic and Nugget hops it has a ton of tropical fruit aromas on the nose and pine flavors join the party when you get to the taste.  The bitterness you expect for a DIPA is there, but it does not detract from the flavors.  Honey malts are used which gives it a little bit of sweetness, and the mouthfeel is smooth and creamy.  I think it is superior to its more hyped DIPA cousin to the north, Bell’s Hopslam.  The next opportunity to get your hands on this amazing beer is this coming March. (Editor’s note: Due to a trademark dispute with Widmer Brewing, this beer will be called Chillwave from this point forward).

3. Wulver by Thirsty Dog (Barrel Aged Scotch Ale) – According to legend a Wulver is a kind of werewolf that inhabits the Shetland Islands of Scotland, so this beer keeps the dog theme that you expect from Thirsty Dog.  Wulver is a Scotch Ale aged for 11 months in bourbon barrels. The nose is an enticing mix of caramel, bourbon and vanilla.  The taste is smooth caramel accented nicely by vanilla notes from the oak barrels.  Bourbon is a supporting actor in the taste, but there is relatively little bourbon burn on the finish. The mouthfeel is rich and silky smooth.  It’s amazingly drinkable for 12% abv.  We compared Wulver and Backwood’s Bastard from Founders in the Ohio vs. Michigan Blind taste test and Wulver emerged the clear victor salvaging a tie for Ohio in that contest.  One of the best, if not the best, barrel aged beer I’ve had the pleasure to try.  If you are looking for the ultimate Scotch Ale your quest ends here.

4.  4-Elf by Dark Horse (Winter Warmer) – In the crowded Winter Warmer category this beer was a revelation to me.  The nose reminds me of a spiced chocolate rum cake, with chocolate, cloves, nutmeg, dark fruits and a little alcohol.  The taste follows the nose pretty closely.  This is a beer accentuated with spices, which is the opposite order from most winter warmers I’ve tried.  The base beer here is not so far from the rich chocolate goodness of Founders Porter, and the cloves go particularly well with the dark chocolate malts. The mouthfeel is thick and chewy.  I sampled Winter Warmers from many breweries this year (Great Lakes, Thirsty Dog, Elevator, Southern Tier, Harpoon, Fatheads, The Brew Kettle) and 4-Elf was easily my favorite.

5.  Mo by Maine Beer Co. (American Pale Ale) – Made with Warrior, Falconer’s Flight, and Simcoe hops, this beer has a delicious juicy fresh hop aroma. The taste is fruity with a dry, peppery finish that lingers for a while.  The mouthfeel is smooth, almost creamy.  It’s a little like crossing two of my favorite beers, Founders Harvest Ale and Victory’s Prima Pils.  This beer came to me by the way of my friend Chris visiting from Virginia.  It is unfortunately not available in Ohio, but I think it is readily available up and down the Atlantic coastline.

6.  Trailhead Pale Ale by Fatheads (American Pale Ale) – I had a hard time with the 6th pick, but I decided to go with Trailhead because it is both from Ohio and newly released in 2013.  This beer, which is available only on tap, took home a silver medal from the 2013 Great American Beer Festival.  It is fresh hopped with Citra and Simcoe hops and is entirely about the fresh green hop flavors and aromas.  It is in much the same vein as Founder’s Harvest Ale, but unlike the stories above where the Ohio beer outperforms the Michigan beer it is emulating (Alchemy Hour vs. Hopslam, Wulver vs. Backwood’s Bastard) here the contender (Trailhead) is not quite able to outdo the champion (Founders Harvest Ale).  As of Christmas Eve this beer was available in Columbus area growler shops (Savor Growl, The Ohio Tap Room), but I’m not sure if it is still around.

There were quite a few runner ups that just missed the last spot.  Head over to the beer reviews page if you would like to see more of my ramblings and picks for beers you should try in 2014.