This week brings another highly anticipated special release to Ohio, Bell’s Hopslam, which is a 10% abv, double IPA, brewed with honey and six different varieties of hops.  For those of us living in Ohio there are more elusive beers to come by (like Founders KBS or Three Floyds Zombie Dust) but Hopslam is usually only available for a week or two out of the year.  Its limited availability makes it a pretty hyped beer, it’s rated the #19 beer on BeerAdvocate, and the #25 beer on RateBeer across all styles. That factor along with its price tag of $18 per six-pack makes it a somewhat polarizing beer.  Some people are crazy about it, whereas others think it is overrated.

If you haven’t tried Hopslam before you might be wondering is it really worth that kind of coin? At this point it is useful to put things in perspective.  Yes $18 it is pretty pricey for a 6-pack, but in the world of beer (let alone alcoholic beverages) it’s not so unreasonable.  If we translate that same volume of beer to other sizes in which beer is sold it works out to $16 per 64 oz growler, or $6.25 per 25 oz (750 mL) bottle.  People buy growlers and large bottles at prices higher than that all the time with nary a complaint.  In the end I think it is well worth the price if you really like it, but if you can buy a 6-pack of another beer that you like much better than Hopslam for $12, $10 or $8 you should do so.

“Made with six different hop varietals added to the brew kettle & culminating with a massive dry-hop addition of Simcoe hops. A generous malt bill and a solid dollop of honey provide just enough body to keep the balance in check, resulting in a remarkably drinkable rendition of the Double India Pale Ale style.”

One more digression before I get into what I think about this year’s batch of Hopslam.  It’s a quote from John Mallet, manager of Bell’s brewery speaking about how peoples taste in hops has changed over the years (the quote comes from a Stan Hieronymus blog post about Hopslam):

“(Imagine) if you’d gone to the hop growers association 20 years ago and said, I’m going to have a beer that we make 4,000 barrels of one time a year. It flies off the shelf at damn near $20 a six-pack, and you know what it smells like? It smells like your cat ate your weed and then pissed in the Christmas tree.”

Enough background, let’s get to the beer.  The beer I’m drinking was bottled on 1/11/14 which makes it about 2 weeks old.  It pours a translucent, golden-amber color that I have to say possesses more than a passing resemblance to a glass of honey.  If you pour it aggressively you’ll get a big (3-4 fingers), pure white head that settles out quite slowly, leaving 4-5 mm of head that stays around for much of the beer. It’s an attractive beer. 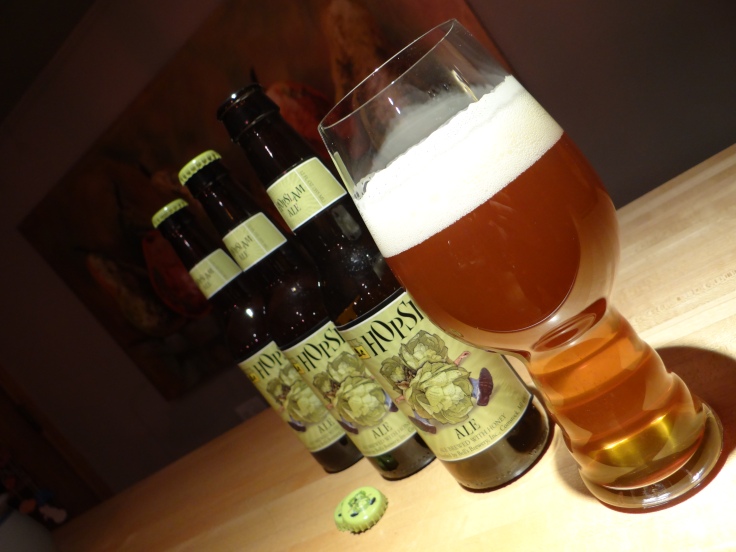 The aroma is equal parts fruity and floral.  Despite Mallet’s description of the aroma I would say its nose is fairly restrained for a double IPA.  However, I do get a little bit of what I would call a catty smell.  If you are sensitive to that kind of odor Hopslam may not be your cup of tea, but I would stress that I have to concentrate to identify this odor (but I tried it 2 nights in a row and it was present for me both times).  I’m going to assume this comes from the Simcoe hops used for dry hopping.

Moving past the opening act and coming to the main attraction, Hopslam is a surprisingly smooth, easy drinking beer.  You expect something bracingly bitter, but the honey seems to smooth out the rough edges.  There is a piney finish but the bitterness only emerges after the beer is well down your throat.  The label says this is a biting, bitter tongue bruiser of an ale, but I don’t think anyone accustomed to drinking IPAs would use that description.  The alcohol is extremely well hidden, making it very easy to forget this is a 10% abv beer.  Both bottles I’ve tried so far this year went down surprisingly fast.  If you are drinking Hopslam on tap at a bar and have any intention of driving home, approach with caution.  The mouthfeel is pleasantly thick, but not particularly oily or resinous, as is often the case with double IPAs.

This is an exceptionally well crafted beer.  It’s impressive to make a strong hop-forward beer that is so easy drinking.  I don’t know if there is another double IPA that has this kind of mouthfeel.  I don’t regret picking up a six pack for minute.  At the same time, I have to say that for this degree of hype I expect a beer whose taste and aroma knock my socks off, and in my opinion Hopslam doesn’t quite deliver on that promise.  In the end you’ll have to be the judge, but don’t hesitate for long because the gift that is Hopslam will disappear from the Central Ohio shelves faster than free beer at a monastery.