In this review I’m going to compare two of my favorite hop-forward late winter releases: Nugget Nectar by Tröegs in Hershey, PA and Chillwave by Great Lakes out of Cleveland, OH.  Since Nugget Nectar is an Imperial Amber Ale while Chillwave is an Imperial IPA this comparison may seem somewhat artificial, but these two beers have some important things in common and I would argue that the comparison is instructive, particularly when it comes to teasing out how different hops contribute to the overall aroma and taste of each beer.  Since both Tröegs and Great Lakes are great about providing great detail on the ingredients that go into their beers we can start by looking at the vital statistics of each beer.

What the Brewer has to say: Squeeze those hops for all they’re worth and prepare to pucker up!  Nugget Nectar Ale will take hopheads to nirvana with a heady collection of Nugget, Warrior and Tomahawk hops.  Starting with the same base ingredients as our flagship HopBack Amber Ale, Nugget Nectar intensifies the malt and hop flavors to create an explosive hop experience. 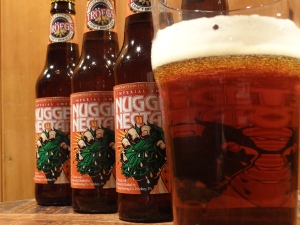 What the Brewer has to say:  (Several sentences about Lake Erie surfers which I will skip for the sake of brevity).  With a flash of Mosaic hops and a kiss of honey malt, it’s a rush in a bottle. Ride our Chillwave. Then go out and find your own.  …. The taste is hop-forward with a balanced blend of Mosaic and Nugget hops. 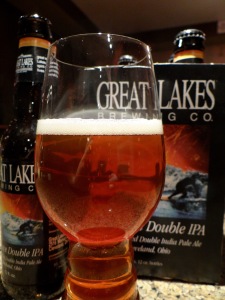 These two beers are relatively similar in terms of abv (7.5% vs. 8.6%), ibu (93 vs 80), and price ($2.17 vs. $2.50 per bottle). Both are clear with a deep amber color, and both feature Nugget hops prominently. The thing that I love most about each of these beers is the delicious fruity aroma and taste.  (Here I mean fruity due the aromas and tastes that come naturally from the hops.) The fruity character of both beers is distinctly different from the grapefruit-like citrus flavors that you get with the most west coast IPAs, or the mango and wine-like flavors that you get from beers containing New Zealand hops (e.g. Nelson Sauvin).  The word juicy came up in my reviews of both beers, because the waves of fruity goodness are accompanied by a subtle nectar-like sweetness rather than the more conventional dry, piney bitterness.  That’s not to say that these beers are not bitter, but given the high IBU levels the bitterness is pretty smooth/restrained in both beers.

Nugget Nectar has a more substantial malt canvas on which the hops come to life.  There is a little caramel from the Vienna and Munich malts that compliments the hops nicely. The fruity aromas and flavors of Nugget Nectar are hard to describe exactly but they bring to mind oranges, tangerines and peaches.  There is just a hint of pine on the finish.

Chillwave has similar orange/tangerine/peach notes, but they are accompanied by a healthy dose of funky hop flavor/aroma that brings to mind descriptors like tropical fruit and dank.  After reading about the Mosaic hops used in Chillwave I can swear there are hints of blueberries in the hop funkiness (although I would have never found the taste without the power of suggestion).  Chillwave leaves a slightly sweet lingering taste in your mouth that is just a shade sweeter than I would like.

I’d give Nugget Nectar higher marks for drinkability.  If you are looking for a supremely well balanced, fruity, hop forward beer it’s hard to top Nugget Nectar.  If you are looking for a bold celebration of unconventional hop fruitiness, Chillwave is the beer for you.  It pushes the unconventional hop flavors and aromas up to the edge without going over the precipice (at least for my taste buds).  I think it is the best Imperial IPA out there.  On a 1-10 scale I would give Nugget Nectar a rating of 8 and Chillwave a 9.5.

If you just want to know what these beers taste like you can stop here.  If you are interested in how the brewers use different hops to get these unconventional flavors in both beers keep reading.

The Tale of the Hops

To get into more details on the hops used in these two beers I’m going to rely mostly on two sources: Stan Hieronymus’ book “For the Love of Hops”  and the Beer Legends website.  Since the common hop to both beers is Nugget, for the time being let’s assume for the time being that Nugget hops are responsible for the orange/tangerine flavor and aroma (as we’ll see this assumption may not be correct).  The Beer Legends website has a useful description of Nugget hops:

“Nugget Hops was released in 1982 by the USDA and is a cross between Brewers Gold and a high alpha acid male. Nugget Hops is the mother of Millenium Hops and by 1991 had taken over 14.1% of U.S. hop production.

Nugget Hops has an acute bitterness from it’s 9.5%-14.0% alpha acid content.  It provides the umph in many beer styles that require the hop jolt including imperial style ales.  It’s a dual use hop that has green, herbal aroma.  It has a relatively low co-humulone oil content.  The myrcene oil (content) is on the high side, which helps provide some of the woody tones.”

Before going on let’s take a moment to elaborate on some important terms in this description that may not be familiar to some readers, like alpha acid, co-humulone and myrcene.

Humulones are a class of organic molecules that are known as alpha-acids and give beer its characteristic bitter flavor.  Any hoppy beer made with substantial amounts of American hops is going to be relatively high in alpha-acids.  Alpha-acids can be further subdivided into humolones, co-humulones and ad-humulones.  The low co-humulone description of Nugget is pertinent, because conventional wisdom is that beers with low levels of co-humulone have a “smooth” bitterness, while those with high levels of co-humulone have more of a “harsh” bitterness.

Myrcene is a volatile hydrocarbon (an alkene, 7-methyl-3-methylene-1,6-octadiene for the chemists out there) that is associated with green, resinous aroma/flavor.  Other plants that have high levels of myrcene include thyme and cannabis.  Myrcene is responsible for much of fresh picked green hop aroma of fresh hopped beers.

So beers that prominently feature Nugget hops should have a smooth bitterness and some green, resinous woody notes.  For both Nugget Nectar and Chillwave the “smooth bitterness” descriptor seems right on the mark, while the green/resinous aroma does not jump out at me.  Nobody seems to mention the orange/tangerine/peach flavors that I am picking up, so it seems like they are coming from the other hop varieties.  Let’s take a look at brief descriptions of the other hops used in Nugget Nectar (descriptions are amalgams taken from “For the Love of Hops” and the Beer Legends website).

None of the hop descriptions seems to mention the orange/tangerine/peach flavors that I am picking up, but the aromas of both Simcoe and Palisade are associated with the non-standard fruity goodness that I get from Nugget Nectar. However, both Warrior and Simcoe have low co-humulone oil content further reinforcing the “smooth bitterness” aspect of Nugget Nectar.  Also notable is the lack Cascade or Centennial hops, both of which are closely associated with the grapefruit flavors, and Chinook hops, that bring a piney, resinous aroma.

The bottom line is that while Nugget gets top billing, the other hop varieties probably play an important role in giving Nugget Nectar its orange/tangerine/peach character.

When describing the beers I noted that Chillwave has a funky, tropical fruit/dank character that is distinct from Nugget Nectar.  Almost certainly that aspect of the beer comes from the Mosaic hops.  In fact I’m going to say that Chillwave is the poster child for Mosaic hops.  Over on the blog “A PhD in Beer” Matthew Humbard describes Mosaic as “Simcoe’s sexy little sister.”  While I think that is pretty good description, let’s see if we can get something more specific.  Here is what Stan Heironymus has to say about Mosaic:

“Available in quantity for the first time after the 2012 harvest.  Still known to many as HBC 369.  A daughter of Simcoe crossed with a disease-resistant, Nugget derived male.  Rich in mango, lemon, citrus, pine and notably, blueberry.”

Here is the description from the website Rebel Brewer:

“Also known as HBC 369, Mosaic is the first born child of Simcoe.  Some have described it as Citra on steroids, but it’s much more than that.  Rich in mango, lemon, citrus, earthy pine, tropical fruit, herbal and stone fruit notes.”

These descriptions are more or less consistent with the tropical fruit character that I was having a hard time putting into words earlier in the review.  I will also add that Mosaic is another low co-humulone hop, hence the smooth bitterness of Chillwave is comparable to Nugget Nectar.  Since Mosaic’s father is Nugget I wonder if that makes Chillwave’s Mosaic/Nugget blend a borderline incestuous beer?

Both Chillwave and Nugget Nectar are great beers in my book. Nugget Nectar shines in a more conventional sense, sort of like the Miss America of hoppy beers.  If you are looking for something that pushes the boundaries Chillwave is definitely worth seeking out.  Although my better judgment says it is a bad idea I’m going to compare these two beers to celebrities.  Nugget Nectar is your conventional beauty, say Kaley Cuoco, while Chillwave has an edgier, unconventional appeal like Zoey Deschanel.  If you prefer a sports analogy, Nugget Nectar is skilled and reliable like Landon Donovan while Chillwave is in your face and unpredictable, but capable of brilliance, like Frankie Hejduk.  I’m sure there’s a better analogy out there, so feel free to make your own comparison in the comments section. 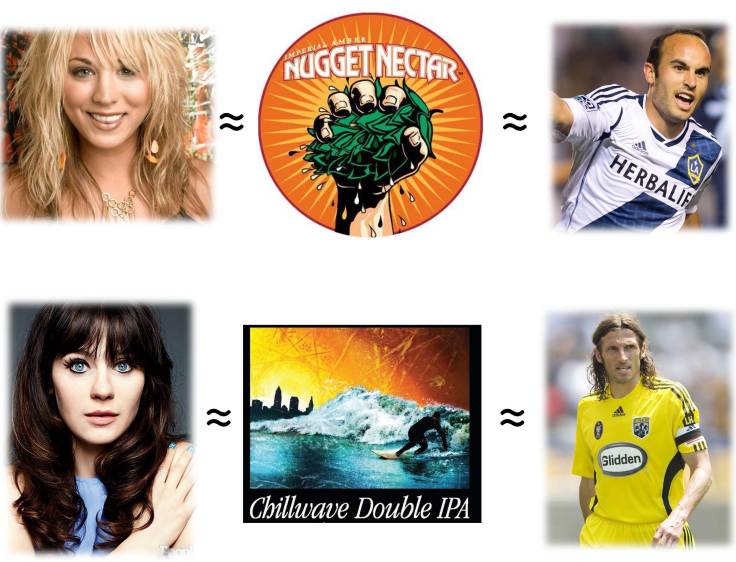 If you haven’t yet tried these gems of late winter you better pick some up soon, because stocks won’t last much longer.  I predict that Mosaic is destined to join Citra and Simcoe and as one of the new “it” hops. For the home brewers out there I’d love to hear your thoughts on the connections between the ingredients and the aroma/flavor of these two beers.

4 thoughts on “Chillwave vs. Nugget Nectar – A Tale of the Hops”