Recently I attended a conference in Knoxville, Tennessee that was to be followed by a vacation on the North Carolina coast.  Naturally my brain started thinking about enticing beer destinations that might be in the vicinity of either location.  It didn’t take very long before a plan to visit Asheville, North Carolina was hatched.  Many readers may not be familiar with their breweries, but Asheville was voted Beer City USA four years in a row (2008-2012) in Charlie Pappazian’s online poll.  There are roughly 25 breweries in the Asheville area, including new production facilities for some of the big boys in the craft beer scene such as Oskar Blues, Sierra Nevada and New Belgium.

I recruited my friends Michelle and Andy, who live in Oregon but were once students at the University of Tennessee to join me after the conference and partake in the fermented pleasures Asheville has to offer.  Andy’s parents John and Karen joined in for the fun.  They all had to get back to Knoxville after the first night, but I stayed on for a second day to enjoy myself and dig a little deeper into the Asheville beer scene.  Obviously with so many breweries and so little time I was only able to hit a fraction of the possible stops, but I think the six breweries I did visit give a representative picture of the city.  Below is my review of Wicked Weed Brewing.  Subsequent posts will describe Green Man, Burial, Highland, Wedge, and Hi-Wire Brewing.  If you are planning a trip to Asheville I hope you will find this information useful.  If you’ve been there in the past I’d love to hear your thoughts in the comments section.

My first stop was the Sheraton Four Points hotel, which is located just off of I-240 not too far from the downtown.  I chose it because it was the cheapest of the downtown hotels that had rooms available.  Although the interior decoration had touches of Soviet era post modernism, the bed was pretty comfortable and the location was decent.  If you want something right in the heart of the downtown brewery scene the Alofts hotel looks like a better choice.

After hitting town and checking into the hotel our first stop was Wicked Weed.  I had read some good things online about this place and it came highly recommended from fellow beer blogger Tom Aguero from Queen City Drinks.  Wicked Weed has only been open since 2013, but it already seems like the place to go.  Located right on the main drag (Biltmore Ave) they draw a big crowd, but fortunately they can hold a lot of people, particularly when the patio and the downstairs tasting room are open. The décor is pretty upscale with a Henry VIII theme that gives it the feel of a trendy, modern English pub.  The Henry VIII connection is based on a quote of his declaring hops “A wicked and pernicious weed.”  The theme even extends to the bathrooms where a placard displaying Henry VIII adorns the men’s room doors, while the women’s room is marked with placards of three of his wives (where are the other three?).

I ended up eating dinner here both nights I was in town.  The food was very good, with prices that are decent for a touristy area like Asheville.  I particularly recommend the small plates, which are big enough to be a meal for one, or can be shared as an appetizer.  The fish & chips and the calamari were both excellent.  Even though it was busy the service was prompt.

Wicked Weed offers 15 or so beers on tap covering an impressive range of styles—hoppy IPAs, Belgian-style beers including several Saisons, a few barrel aged selections, and open fermented Brettanomyces ales.  They do flights, so between the five of us we were able to sample most of what they had on offer (it also didn’t hurt that I stopped here three times in two days).  Most of the beers were somewhere between very good and excellent.  Here are brief descriptions of some beers that made an impression on me.

Bretticent (6.5% abv) – A Saison made with barley, wheat and rye in the malt bill, open fermented and finished with Brettanomyces.  It’s similar to a couple of my favorite beers, Orval and Seizoen Bretta, and that was enough to make it my favorite beer of the trip.

Imperial Coolcumber (9% abv) – The base beer, Coolcumber, is an ale infused with cucumber and basil.  They take it up a notch in the imperial version by aging it for three months in gin barrels.  It tastes like a cucumber, with accents of basil and juniper from the gin.  The alcohol is well hidden.  It sounds weird but for a refreshing summertime drink it works.  I can say without hesitation I’ve never tried anything like it.

Freak of Nature Double IPA (8% abv) – This is a well done West Coast IPA that is everything you would expect from that style—hoppy and aromatic with a respectable dose of bitterness and a resinous mouthfeel.  I think they are going for a Pliny the Elder clone here, and they’ve come close to the mark.

Serenity Wild Ale (5.5% abv) – This beer won the gold medal in the Brettanomyces Ale category at the 2013 GABF.  It’s open fermented like Bretticent, then aged in Savignon Blanc barrels.  There is a ton of lovely Brett barnyard aroma on the nose.  The taste is tart but not overly sour, with a mouthfeel that is reminiscent of wine.  I did enjoy this one, but personally I prefer Bretticent.

We also tried some of their more conventional offerings like the Wicked Stout, Tyrant Double Red, Ruffian Black IPA and Sweet Talker Session IPA, none of which disappointed. 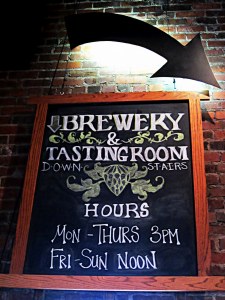 In addition to the main level and patio where most of the people seem to be both eating and drinking there is a tasting room downstairs that is all about the beer. All of the upstairs beers are available in the downstairs tasting room plus an additional 3-5 selections.  Even though it is downstairs the west wall opens up into an open air space where supplies are delivered to the production facilities.  Not only does this allow some ambient light to spill into the tap room, there are a few tables where you can soak up some sunlight/moonlight or play a game of cornhole.  At night the music is pretty loud which makes conversation a little challenging, but it’s worth checking out if nothing else than to see what beers are available only downstairs.

When you put it all together this is one of the best breweries I’ve visited anywhere.  They have crazy good beer with styles to suit almost any palate, tasty food, good service and decent prices.  In terms of beer styles and quality they remind me of Russian River.  If you visit Asheville this is needs to be one of your stops.  The only down side is the fact that it’s a pretty hip/trendy place.  If you want something uber laid back and casual there are better options in Asheville.  Because it can get pretty busy at peak times my advice is to hit Wicked Weed early.