Last month I was downtown and my friend Phil suggested we stop by a small place called House Beer (843 N. High Street).  This place was completely off my radar but it is a cool joint with an impressive beer selection.  If you are in the Short North it’s worth a stop. After trying a Pomegranate Lambic by Rivertown, I was looking to drink a Columbus beer and the bartender recommended Conductor Imperial Rye by Actual Brewing.  I’ve previously reviewed a couple of Actual Beers, Orthodox Winter IPA and Curiousis Berliner Weiss.  Both are solid beers that I enjoyed, but truth be told in both cases the beer itself was somewhat overshadowed by the artistic, colorful labels featuring faceless women.  After the first few drinks of Conductor I quickly realized I had found a special beer.  So the next week I picked up a bottle at Weiland’s Market and took it with me on vacation for a proper review. 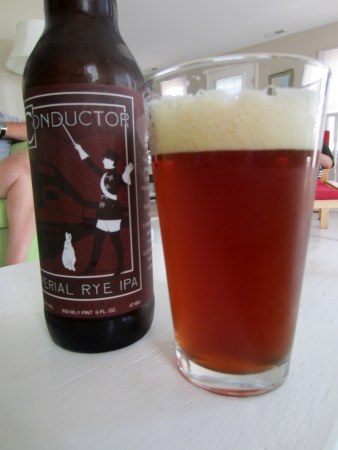 The brewer has this to say about the beer, which was brewed as a celebration of their first anniversary:

The beer fills the glass with a hazy, copper colored liquid topped by a good 2-3 fingers of creamy off-white head that settles out oh so slowly.  I’m impressed by the head retention.  The nose is dominated by nice fruity hops, an inviting aroma but only a hint of things to come.  As I take my first drink I initially get a hit of grapefruit from the hops that is nicely balanced by the malts.  For an instant I’m thinking that I’m about to experience a tasty pale ale akin to Alpha King by Three Floyds.  Before that thought can settle into my brain, a wave of rye spiciness rises up and washes over my tongue, culminating in a fresh spicy finish. Wow!

This is a bold offering by Actual.  The rye is as aggressive enough as any Rye PA I’ve encountered.  I followed it with a Hop Ryot by Jackie O’s (a very solid Rye PA) that seemed very pedestrian by comparison.  This could be the best Columbus brewed beer I’ve tasted since I first tried Bodhi so many years ago!  Fred Lee if you read this post please keep making this beer.