As a long time resident of the Clintonville neighborhood of Columbus I was excited when I learned that we were going to get our own brewery, Lineage Brewing.  No longer would I have to endure the taunts of my friends from Grandview, Victorian and Italian Villages, Delaware, or Marengo for living in a brewery-free backwater.  It took a while to get convert the former car/pet wash into a brewery, but I’m happy to report that the wait is over. So when my birthday rolled around earlier this week it seemed like the perfect time to head over to Lineage and check things out firsthand.  Here are my initial thoughts. 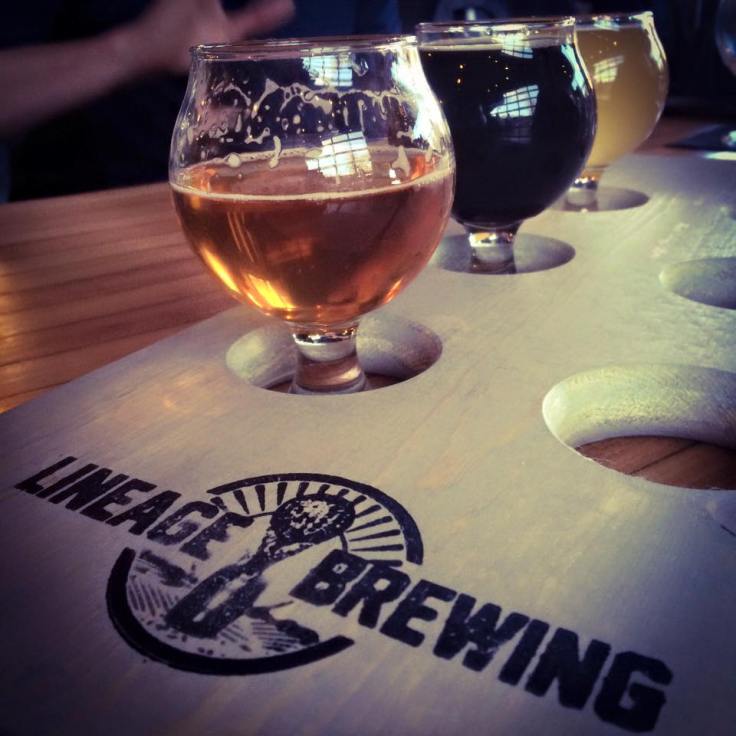 The brewery is located on High Street just south of the intersection of High and Weber (it’s in the building adjacent to Lavash and Growl!, which will be a familiar spot to many).  In it’s former life the space was a car/pet wash (check out the picture in this Columbus Alive article from last summer for a retrospective look).  The brewing equipment occupies roughly 1/3 of the space and is separated from the bar by a wall with several windows that let customers get a peek at the brewers and equipment. 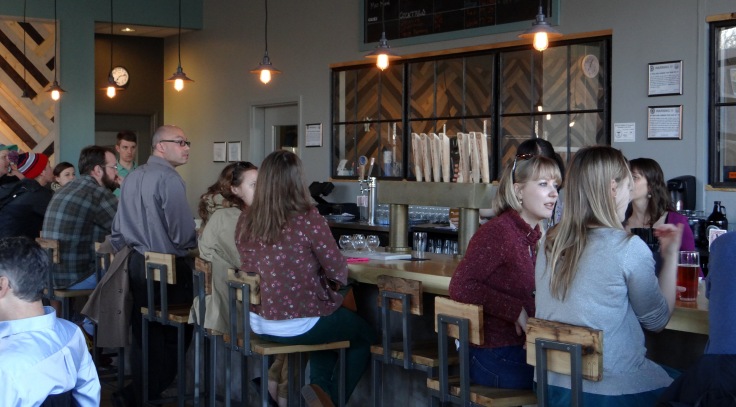 The bar/taproom area is more spacious that I was expecting.  The east and south facing walls are full of windows, which as you can see in the pictures here makes for a bright, open space during daylight hours.  Once the sun goes down the light comes from trendy Edison lights that hang from the ceiling.  A colorful herringbone wood parquet pattern graces the back wall, and the tried and true chalkboard on the wall behind the bar advertises the beers on offer.  There are no TVs to compete with the convivial conversation of the patrons. Even though my visit was on a Tuesday evening they drew a very respectable crowd. 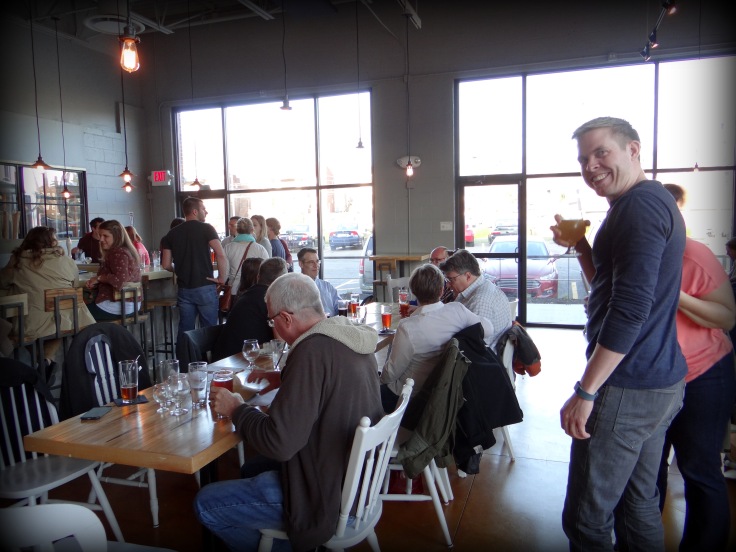 It’s still early days for Lineage so I’m not going to get too detailed with my descriptions of the beer, but it wouldn’t be much of a preview if I neglected the beer entirely. There were four beers on tap when I visited: Shoot-the-Chutes Cream Ale, Bricky Briffon English Bitter, Aunt Bernice Berliner Weiss, and Mike Drop Coconut Porter. I only had a few sips of the Cream Ale, but I did put down full glasses of the other three.

Aunt Bernice Berliner Weiss (4.9% abv, 4 IBU) – It’s awesome to see a sour among the initial offerings. Aunt Bernice is tart but not not so sour that it will frighten away newbies to the sour beer scene (maybe you have a relative with similar attributes).  Cloudy and straw colored, with a nice touch of barnyard funk on the nose.  I enjoyed this one and I’m betting it will be a popular choice when the warm weather arrives.

Bricky Briffon English Pale/Bitter (5.8% abv, 20 IBU) – This amber colored offering was my favorite of the night.  It leads with slightly sweet biscuity malts, nicely accented by notes of toffee and subtle floral notes in the background. If you are a hardcore hop head you’ll find the hop presence pretty restrained, but the hops that are present keep things nicely in balance. On the whole I thought it was spot-on for an English bitter.

Mike Drop Coconut Porter (5.9% abv, 24 IBU) – This was the favorite of many people in my party.  Dark and roasty, not too sweet, with just enough coconut flavor to conjure memories of Monty Python and The Holy Grail,   I’ll have to revisit this one with a fresh palate. (Editors note – I did revisit this beer and I retract my statement about there being a shade too much coconut, it’s actually pretty subtle).

Shoot-the-Chutes Cream Ale (6.0% abv, 16 IBU) – I only had a couple of sips of this one, so it’s hard to say much.  If you are looking for something easy drinking, that tastes like “beer” this is the one.  For what it’s worth my wife gives it two thumbs up.

From what I’ve read online the plan is to eventually work up to 10 house beers on tap (see Columbus Business First article by Dan Eaton).  According to the menu board a Rye Pale Ale and a West Coast IPA are coming soon.  I’ll be interested to see how these turn out, because in this day and age it’s hard to have a great brewery/brewpub without a solid IPA. (Editor’s note: Both of these were on tap when I visited four days later, both are very solid good representations of the style.) They were also serving two sodas from Rambling House (Ginger Beer and Cola), a cider from Mad Moon, and three cocktails.

Lineage left a good first impression on me. Housed in an inviting space, they are making some seriously drinkable beers and offering up styles not found everywhere.  I was mildly disappointed they didn’t leave some vestiges of the car wash days to give them a unique edge. Maybe a high pressure hose for dousing your buddies in partially chilled wort (they have the floor drains for it), or hot wax Wednesdays.  In all seriousness, I predict a long and prosperous union between Lineage and the residents of Clintonville.  I’ll have to return for a more in-depth look once they get settled in and hit their stride.  In the meantime I suggest you make your own pilgrimage to 2971 N. High Street, especially those unfortunate souls who live in brewery-free wastelands like Upper Arlington and Hilliard.