How can you have a craft beer week without a collaboration beer?  Admittedly it’s not against the law, but it would like the All Star Game without a home run derby, like the state fair without butter sculptures, like Lucy without a sky of diamonds.  Since the 3rd annual Columbus Craft Beer Week is less than three weeks away (May 12-20) , it seems a good time to look ahead at this year’s collaboration beer. Despite my lack of either brewing or media credentials, I was invited to come hang out at the Columbus Brewing Company (hereafter CBC) on collaboration brew day back on April 8.  What follows are some thoughts on the experience, including my first look at the CBC production facility since they moved out to the west side of Columbus, and some details about this year’s collaboration beer.

How many brewers does it take to make a collaboration beer?

I arrive around 8:15 am on Saturday morning with my friend Mark Richards, operations director at Land-Grant Brewing.  We briefly wander around the rooms at the front of the building looking for everyone else.  Coffee and doughnuts are slated to be delivered soon, but Kris Fry (of Ram) can’t wait and has convinced Beth Bean to brew a fresh pot of coffee in the front reception area.  When we finally make our way into the cavernous hall where the brewing equipment is located, we find a couple dozen people milling about while waiting for the coffee to arrive.  My eyes are immediately drawn to the shiny, computer controlled BrauKon brewhouse and the rows of stainless steel fermenters that reach to the ceiling.  I’ll come back to the details later, but suffice to say that the setup here is very impressive with a oodles of room to expand. 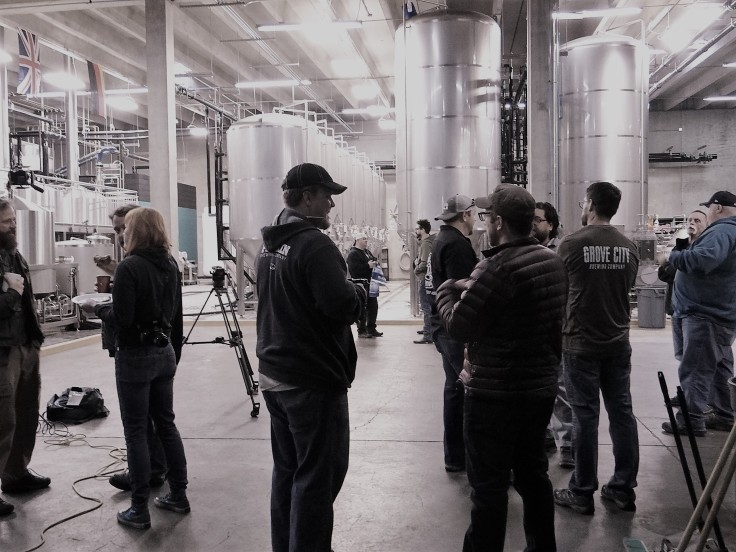 People trickle in as the morning progresses.  Most of the breweries in Central Ohio are represented, but it only takes one or two CBC brewers to monitor the beer’s progress and press the buttons that initiate various stages of the brewing process on the new German-built brewing system.  There’s no dumping heavy bags of malt into the mash tun or stirring things with a paddle, which means nearly all of the assembled brewing talent is free to swap stories, eat doughnuts, and drink coffee.  Every once in a while, a small pack of brewers will break away to climb the stairs and look in the mash tun, but it’s more an excuse to get a closer look at the equipment than anything else.  At some point a local TV news program interviews Tony Corder from CBC.  Everyone is asked to keep the noise down and avoid using profanities, as far as I can tell no FCC rules are violated.

There is a cart set up with taps of four CBC beers: Summer Teeth, Thunderlips, IPA, and SFW.  I wonder how long it will take until someone decides enough is enough with the coffee and pours the first beer.  The answer it turns out is approximately 9:30 am.  Within 45 minutes most people, myself included, are sipping on CBC beers.  I’m doing the best I can to pace myself, but given the chance to drink CBC beer this fresh it would be a disservice if I didn’t sample each beer.  Not a stinker in the bunch, no surprise there.

The first Columbus Craft Beer Week was awash with collaboration beers.  Local breweries teamed up in groups of two or three, and each team came up with its own collaboration beer (click here to read my recap of the collaboration beers from the inaugural CCBW).  I thought that was one of the most interesting aspects of the week, and it produced some notable beers.  The Actual/Barley’s collaboration beer, Simplicity Golden Strong, and the Seventh Son/Homestead duo of Gatekeeper and Keymaster were my personal favorites.  Apparently the logistics of that approach, or perhaps the amount of effort involved, or maybe just the intense pheromones that are generated when too many brewers are sequestered in a confined space, was not to everyone’s liking because in year two there was a single collaboration beer, Saison 994.  There was nothing wrong with Saison 994, but I didn’t detect a lot of excitement for it. One pint for curiosities sake was enough to satisfy me.

This year’s collaboration beer is a hoppy pale ale dubbed Dysfunctionale.  Weighing in at 5.9% abv, the malt bill includes American 2-row pale malt, Gambrinus honey malt, and Simpson’s golden-naked oats, which should make for a smooth mouthfeel and some kick-ass head retention.  The hop additions primarily consist of Cryo Hop Lupulin powder.  This is a relatively new product that involves using a cryogenic separation process to separate the resins and aromatic oils from the rest of the plant matter.  Given the trade name that Yakima Chief – Hopunion (YCH) use for the product, LupuLN2, I think it’s safe to assume that liquid nitrogen plays a pivotal role in the separation.  By separating the acids and oils from the rest of the hop plant, YCH claims that brewers can provide intense hop flavor and aroma without introducing astringent or vegetative flavors.  The lupulin powder used for Dysfunctionale comes from the hop formerly known as Equinox (now Eukanot).  In addition to the Cryo Hop powder, Platform brewing donated some El Dorado hops and CBC threw some Simcoe and Idaho 7 hops into the dry hop.  The malts and the lupulin powder were donated, by BSG and YCH, respectively.  Given the ingredients, and CBCs magic touch with hoppy beers, I think there is reason to be excited about Dysfunctionale.

This year’s batch will consist of 60 barrels, roughly 1800 gallons.  Unlike last year, half of the batch will be canned.  Iron Heart Canning, a mobile canning service (formerly Buckeye canning) will be called in to package the beer. The other half of the beer will go into kegs, and will be on tap at participating breweries and special events during Columbus Craft Beer Week, like the Kickoff Party on May 12 at the Grandview Market District, or the Six One Pour festival on May 20 at Huntington Park.

I’ve been curious to see the inside of the Columbus Brewing Company facility for a while now.  Suffice to say it did not disappoint.  The sleek, semi-automated 30 bbl, four vessel brewhouse, manufactured by BrauKon in Bavaria, is undoubtedly the envy of many a brewer working on much smaller brewing systems around the state.  A tube feeds milled grains into the mash tun, and a mere touch of a button, initiates transfers from vessel to vessel.  Then there are rows of voluminous fermentors, arranged in rows with military precision, that can handle an output of nearly 30,000 bbl per year.  Plus they’ve already got the plumbing in place to add another nine or so fermentation tanks, and enough space to go far beyond that if demand dictates further increases in production capacity.

Tony Corder spent some time explaining the GEA Westfalia centrifuge that has been in operation since February to Fred Lee and myself.  All of the CBC beers now go through the centrifuge before heading to the bright tank, which would explain the crystal clear clarity of some of the CBC beers I’ve had lately.  There is a custom controlled program for each beer to deliver the desired level of clarity.

One of the most interesting aspects of hanging out at CBC was seeing how many oak barrels they’ve assembled for their nascent barrel aging program.  Not just bourbon barrels either, there are a lot of unfilled wine barrels here too.  As typical the folks at CBC are pretty close to the vest with future plans, but I did learn that very soon they will be putting beer into those oak barrels as the first step in establishing a line of wild American ales.  Fermentation will take place in a separate building on the former Hill Distributing site to avoid any issues with unwanted cross contamination of the clean beers.  Those familiar with barrel aged sours now that it will be a while before we get to taste the fruits of this effort, but the prospects are tantalizing.

Naturally I asked the question that is on everyone’s mind, what are the plans for an onsite taproom?  I was told they are working on permits and architectural plans for the taproom.  It sounds like they want to do this right, schedule be damned.  When it does come to fruition the taproom will be located in the front of the building.  No time table was offered, but I would be surprised if a tap room opens earlier than late 2017.

Around 11:30 am Eric Bean rolled a couple of gas grills outside.  Angelo Signorino and few others head over to help him out, and before too long the scents of grilled hamburgers, sausages and bacon start drifting into the brewery.  Whoever went shopping must love bacon, because the ratio of bacon strips to burgers is about 6 to 1.  After lunch the crowd starts to thin a little bit and some of us decide to head over to nearby Sideswipe Brewing for the Pixelated Sun release party.  The two breweries are literally only 500 feet apart as the crow flies (check it on google maps if you don’t believe me), but unless you’ve got a jet pack or a hardy pair of wire cutters the direct route is not an option.  The good news is that even by car, or bicycle in Angelo’s case, the two breweries are only a mile apart.  My grueling day of covering the world of craft beer ends sipping on a crisp, hoppy wheat beer at Sideswipe with the front door wide open and glorious sunshine pouring in. 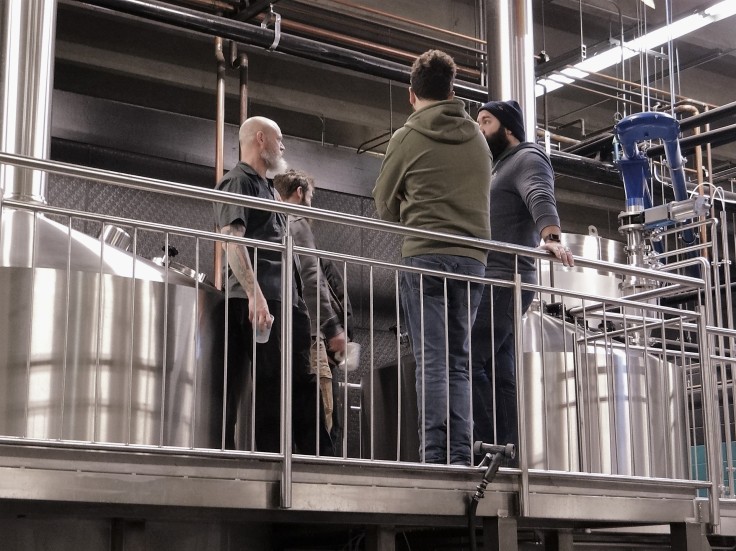