Tonight I’m reviewing two highly regarded midwest Porters.  I just posted a review on Edmund Fitzgerald Porter by Great Lakes Brewing, a beer I consider to be the standard against which all Porters should be measured.  In this post I review Founders Porter and compare it to Edmund Fitzgerald.  Since both Porters are tasty, easy drinking beers that highlight dark roasted chocolate malts, I’m going to focus on the differences between the two rather than the similarities, which are many. 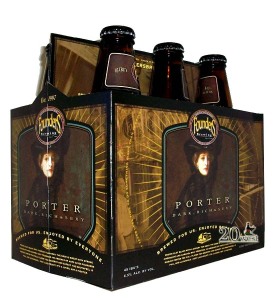 Let’s start with the facts.  Founders Porter is 6.5% abv and 45 ibus, it occupies the #3 slot in the RateBeer.com top 50 Porters list, and has a 4.26 rating on BeerAdvocate.com.  It sells for $10.99 a six-pack here in Columbus.  Edmund Fitzgerald is a little lower on the alcohol (5.8%) and ibu (37) scales and sells for $2 less per six pack.  It is rated the #7 best Porter on RateBeer.com and comes out a sliver ahead on its BeerAdvocate rating (4.27). To the eye both beers have similar dark brown colors but even when you hold the Founders Porter up to the light it’s still completely dark, while EF lets a little light through.  The head on the Founders Porter is also a little darker, more of a mocha than the light beige of EF.  The Founders Porter is a beer that tastes exactly like it smells. Compared to EF the chocolate and coffee flavors are more dominant, the mouthfeel a little creamier, and the finish a little smoother.  While Edmund Fitzgerald leaves you with lingering bitterness, Founders Porter leaves you with a smooth chocolate aftertaste.

There is no doubt that these are two world class Porters.  I’ve compared and contrasted them in blind side-by-side taste test two times over the past year.  They squared off in Round 4 of the Ohio vs. Michigan challenge, and again with an entirely different group of reviewers in the American Robust Porters Blind Taste Test.   In both instances Founders Porter came out on top (in the latter case beating out seven other American Porters).  The smooth chocolate and coffee maltiness of it is just so irresistible.  I will say that the more aggressive hop presence in Edmund Fitzgerald makes it a more complex beer, while the Founders Porter is more of a one trick (chocolate) pony, but it does that trick exceedingly well.