What do you know about the craft beer scene in Idaho?  Unless you are one of the small contingent of family members and old friends who live in Idaho and follow this blog, the answer is probably not much.  In fact I’m willing to bet that many of you would be hard pressed to name even one Idaho brewery.  Who could blame you?  I’ve yet to see a single Idaho beer for sale in Ohio.  However, it would be a mistake to think of Idaho as a craft beer wasteland.  In 2013 Idaho trailed only Washington and Oregon in hop production and led the nation in barley production. In fact my own grandfather used to grow barley on his farm in rural southeast Idaho before he retired.  Plus Idaho has some of the cleanest water in the lower 48 states. If that wasn’t enough according to the Brewer’s Association there are 34 craft breweries in Idaho (probably more by now), which on a per capita basis is the 9th most in the nation (Oregon is ranked #1, Vermont is #2).  The thing is that most of the breweries are small and their distribution is pretty local.

Let’s start our education on the Idaho beer scene with a simple but important question.  What is the best beer made in Idaho?  I can’t claim to have tried them all so let’s see what cyberspace has to say about this question, after all how could we go wrong trusting opinions voiced on the internet?

Unless you’re a member of the B-52s you don’t need to live in your own private Idaho to track down a top notch IPA or Imperial Stout, but highly rated American made ESBs are harder to find than a college graduate at a Ted Nugent concert.  So while I can personally confirm that both The Dogfather Imperial Stout and Dagger Falls IPA are excellent beers, I find Bitch Creek ESB to be the most intriguing contender for best Idaho beer.  My hunch is validated by the checking the medal count from the Great American Beer Festival over the last 10 years, where one finds that Bitch Creek ESB has taken home half of the medals (2 gold, 1 silver, 1 bronze) awarded to Idaho beers .  So on a trip to Idaho earlier this year I made it a point to find some Bitch Creek ESB and bring it back to Ohio. 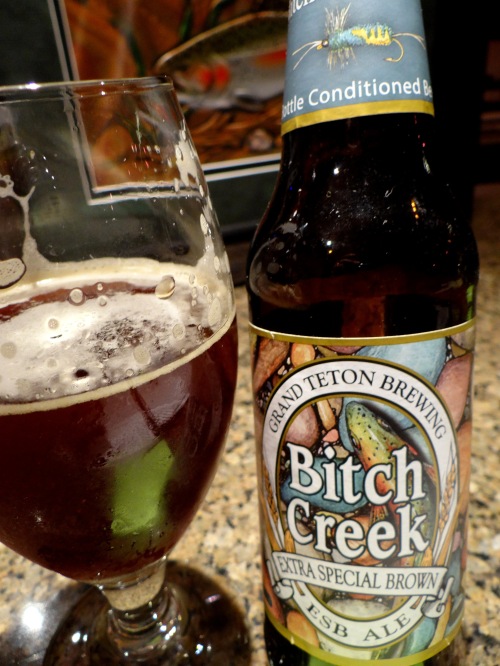 At first glance it’s little hard to know what to think of the name of this beer.  Are the brewers at Grand Teton overly fond of female canines?  Do they have misogynistic tendencies?  Who knows, they may be guilty on both counts, but we shouldn’t infer that from the name of the beer.  Bitch Creek “the beer” is named after Bitch Creek “the creek”, a tributary of the Teton River that flows out of Grand Teton National Park.  To drive that point home there is an image of the bed of a trout stream on the label.  As far as I can ascertain it has absolutely no relation to “Bitches Brew” the Miles Davis double album that inspired a Dogfish Head beer, “Bitchin’ Camaro” the Dead Milkmen song, or “Bitch School” the Spinal Tap song (Editors Note: I did once rent a VCR of Spinal Tap’s Bitch School thinking it was a sequel to their first movie, only to find that the “movie” was only five minutes long.  This gem of western culture is now available on youtube if you are interested to see it for yourself.) 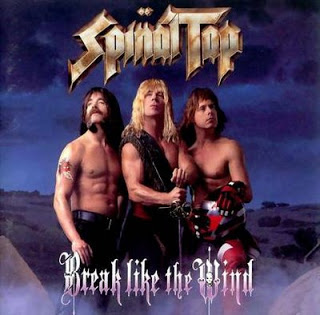 Bitch Creek fills the glass with a cloudy mahogany brown liquid with distinct reddish highlights.  Initially it produces about two fingers beige head.  Even though the head dies down to a scrim after a few minutes, a little swirl is enough to bring out decent lacing on the walls of the glass at any time.  The nose is full of rich caramelized malts, so much so that it reminds me of a Scotch Ale or a Wee Heavy. Turning now to the first sip, those same rich caramel flavors lead the charge but before things can become sweet or cloying a healthy dose of earthy hops sweeps in and puts the malts back in line.  The hops don’t overshadow the maltiness of the beer but they do keep it reasonably dry.  Finally there is a subtle kiss of chocolate at the finish that lingers for a few seconds.  The mouthfeel is medium bodied and creamy.

Although I would say it is closer to a scotch ale than a nut brown ale (and miles away from an ESB in the more conventional sense), I can see why this beer is held in such high regard.  It possesses rich caramel and chocolate flavors from the malts, balanced by just enough hops to keep the drinkability high.  It’s one of the best brown ales I’ve encountered, and of the top Idaho beers it may well be the most unique.  It would certainly be easy to savor a couple of these after a day of fly fishing in shadow of the Teton mountains.

PS – I’m drinking a Lost Continent Double IPA by Grand Teton brewing as I write this review and I have to say it is also very well done.  If you can get your hands on some Grand Teton beers they are definitely high quality brews.