Thanksgiving and the days around it are among the best days of the year for breaking out those beers you’ve been saving for a special occasion.  What could be more apropos, after all the pilgrims stopped at Plymouth Rock in Massachusetts in large part because their supplies of beer were dwindling.  So on Thanksgiving eve this year I decided it was high time to break out a bottle of one of Ohio’s most highly rated beers, Jackie O’s Bourbon Barrel Black Maple.

Any self respecting Central Ohio craft beer geek is familiar with the delicious stouts that Jackie O’ brewmaster Brad Clark cooks up down in Athens.  Oil of Aphrodite, made with black walnuts and Belgian candy syrup, goes down so easy but is chock full of flavor.  In my Imperial Stout blind taste test last winter it finished higher than any other Ohio brewed stout in the field.  Dark Apparition, brewed with 110 lbs of malts per barrel, is a malt lover’s masterpiece whose praises I sang in a review earlier this year.  As good as those beers are, Bourbon Barrel Black Maple seems to be an even more highly regarded beer (at least in cyberspace).  It holds the #5 spot on the BeerAdvocate list of top 100 Ohio beers.  So when my wife and son took a trip down to Athens in early October to visit Ohio University, I asked them to stop by the Jackie O’s brewery and see if they could find a few bottle of this hard to find gem.  This past Wednesday seemed the perfect opportunity to see if it could live up to my high expectations. 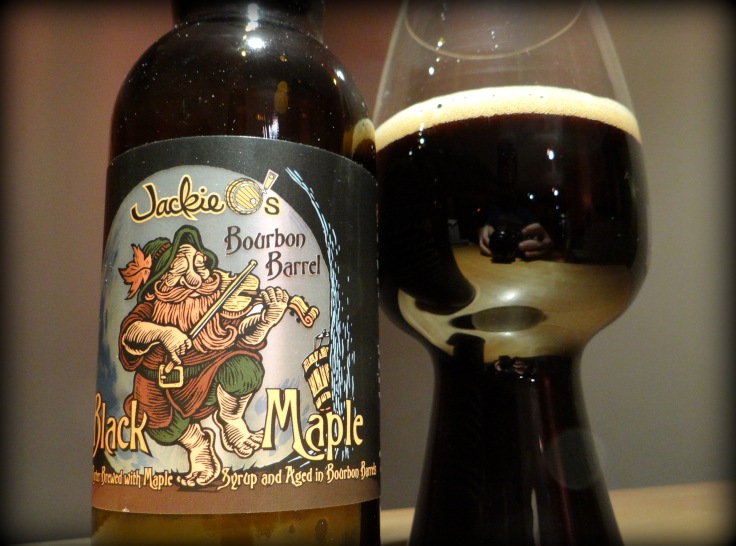 This beer is billed as an Imperial Porter, which inevitably raises questions about the difference between a porter and a stout.  I’m not going to go down that rabbit hole, but I will say that at 11% abv this beer could easily be labeled an imperial stout and no one would bat an eyelash.  The beer is described this way on the bottle:

“Black Maple was a beer we brewed on the fly.  An open brew day was reason enough to go big and bold.  We put our heads together and crafted an imperial porter with deep nutty notes, a touch of smoked malt, a mélange of crystal malts, and a rich chocolate backbone.  Locally harvested maple syrup from Sticky Pete’s was added to the kettle.  The whole batch was then placed into bourbon barrels where it rested for 10 months. “

Not surprisingly, the color is deep dark brown and utterly opaque. The beer pours with a small crown of beige colored head that dies off to a scrim before I’ve gotten very far into my appraisal.  The aroma is an inviting mix of flavors—vanilla from the barrel is at the fore, but there is also a healthy dose of maple, dark chocolate from the malts, and just a hint of smokiness.  It smells absolutely delicious.  The taste follows the nose pretty closely.  The vanilla and maple are the most easily discerned flavors to my palate, followed by smooth chocolate flavors from the malts and just enough bourbon to complement the other flavors without overwhelming them.  Contributions from the smoked malts are lost among the crowded cast of bold flavors, and there is not much in the way of roastiness.  The beer leaves you with a warming sensation as it slides down your throat, but for 11% abv the booziness is pretty restrained.  The mouthfeel is rich and smooth, fitting for such a luxurious beer.

As if the online ratings aren’t enough to raise your expectations, there’s the top shelf price tag. If I recall correctly a 12 ounce bottle of Black Maple retails for $12.  At a dollar an ounce you would be justified in expecting the moon from this very limited Jackie O’s offering.  Beers that come with that level of expectation often struggle to deliver, but I feel that this beer lives up to the hype.  All of the flavors come through as advertised and they complement each other exquisitely.  I like my bourbon barrel aged beers to be big on vanilla and oak flavors and not too boozy, and this beer matches that profile perfectly. It’s a special beer for special occasions. If you are into barrel aged imperial stouts (or porters) this is one you need to check off your bucket list.  I have to admit that I’m not so secretly rooting for my son to attend Ohio University so visits to Jackie O’s can be a more regular Woodward family occurrence.