IPAs are the poster child of the American craft beer movement, to argue otherwise is like pinning your hopes on a Martin O’Malley presidency.  The American-style IPA category is the most competitive style at the GABF (336 entries in 2015).  Sales wise IPAs are far and away the most popular style of craft beer accounting for 27% of all craft beer sales. Whenever I ask a brewer what beer is their top seller the answer is invariably an IPA of some sort, even at breweries that specialize in other genres.  For many years Boston Brewing’s Jim Koch was downright dismissive of hop forward IPAs, but with sales of the Sam Adams Rebel series of IPAs surging while sales of his beloved Boston Lager sag, even Koch seems to be (begrudgingly) singing a different tune.

Most Central Ohio breweries feature one or more IPAs in their lineup, the rare exceptions generally being breweries with a narrowly focused style profile, like Rockmill.  To do otherwise is like leaving money on the table. The one exception (until now) was Actual Brewing.  Sure they have an imperial rye IPA (Conductor) and a black IPA (Orthodox), but no straight up IPA.  Last summer I asked Actual’s founder and president Fred Lee what gives. He told me that the world needs another mediocre IPA like Ohio State University needs more football scholarships (my analogy, but it captures Fred’s sentiment). He then went onto say that they were working on an IPA that he promised would stand out from the crowd.  So earlier this month when I heard that the elusive Actual IPA, with a gestation period that would make an elephant blush, was finally on tap I headed out to the taproom to check it out.

Actual’s newly minted IPA goes by the name Magnon, the physics term used to describe a collective excitation of electron spins in a ferromagnet.  The story of Magnon starts with experimental hop 05256. Just like stormtroopers or characters in Iron Maiden songs, new breeds of hops start life with just a number.  Only those that pique the interests of brewers and drinkers go onto get a name.  Going back into the Pat’s Pints archive, I wrote a glowing review of Actual’s Conductor Imperial Rye in 2014, calling it perhaps the best new beer to emerge on the Columbus beer scene since Bodhi.  What I did not know at the time is that Conductor circa June 2014 was brewed with two experimental hops— USDA 05256 and 07270.  Fred told me that over time uncertainty in hop availability forced Actual to change the hops used in Conductor to a less exotic, but still undeniably tasty combination of Amarillo, Falconer’s Flight, and Citra.  Despite the change they filed away for future use the knowledge that these experimental hops had a magical quality about them.

While USDA 07270 stalled at the experimental stage (too oniony according to Actual brewer/CEO Jonathan Carroll), USDA 05256 captured the imagination of commercial and homebrewers alike.  For a time they were called “Experimental Pine Fruit” hops, before finally shedding the experimental tag altogether and settling in on the moniker Eureka! (and yes the exclamation mark is part of the name). 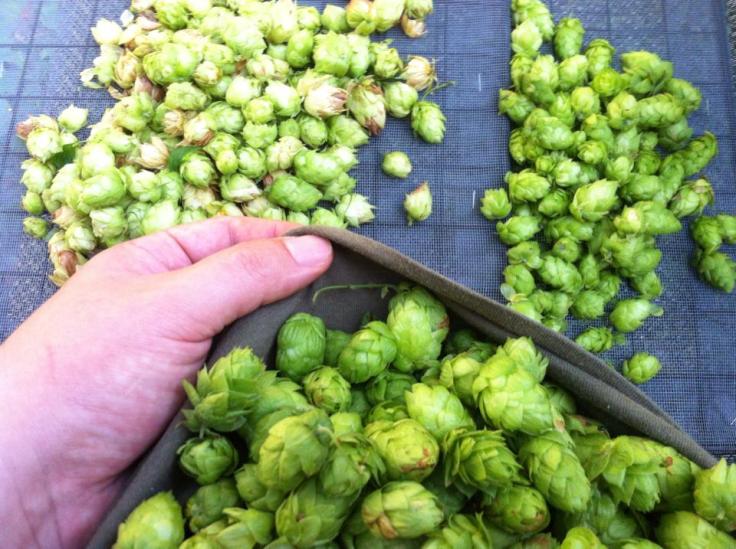 If you ask Fred about Magnon he will spend the first five minutes talking about water chemistry, they take that shit seriously at Actual.  They add gypsum, CaSO4∙2H2O (coincidentally also the main component in sheetrock) and a few other salts to get the water chemistry just right. As an aside the water in Burton upon Trent, where classic English pale ales like Bass are brewed, is high in CaSO4 content.  Once we get past the water we get to the hops, which are the part that you and I can taste.  At its core Magnon is built around the unique characteristics of two hop varietals—Eureka! and Lemondrop. The former brings earthy, herbaceous notes to the beer, while the latter adds lemony citrus notes as its name suggests.  The hop schedule calls for additions of these two hops every minute for the last 20 minutes of the boil, continuous hopping for all practical purposes.  They tried a homebuilt contraption for continuous hopping (see picture below) but had difficulty getting the mix of Lemondrop to Eureka! just right.

Magnon fills the glass with a translucent liquid the color of burnished gold, but what really captures my attention is the head.  On pouring from my growler I get a billowing head of pure white foam with the staying power of David Duchovny on Viagra.  Over a period of 10-15 minutes the head slowly settles to meringue-like chunks floating on the surface of the beer, leaving behind a lacing pattern that would not be out of place in a Victoria’s Secret catalog.  It’s one of the most impressive heads I’ve seen on a beer in many moons.  Maybe all that water chemistry does matter. The aroma and taste are a unique combination of lemon and herbal spices.  After my first glass I stop by the spice cabinet to reacquaint myself with the smells of thyme, rosemary, and sage.  The smells and flavors of Eureka! hops are not identical to any of those, but to my nose they lean in that direction, with a bit of pine in the background.  Then there is the citrus component.  We’ve all had IPAs full of grapefruit or mango, but this is a different beast.  The prevalent citrus notes are unmistakably lemon forward, presumably from the use of lemondrop hops.  The hop oils extracted at the end of the boil make for a slick, oily mouthfeel that coats your tongue and then dissipates as fast as it arrived.

What do I think?  First of all let me say that in my opinion Actual has succeeded in making an IPA that is like no other I’ve previously encountered. The herbal, lemon combination might not be everyone’s cup of tea (pun intended), but I dig it.  It’s an unusual flavor combination that may take some acclimatization, but then again in the early 1980’s no one would have thought to make a beer that tasted like grapefruit juice infused with pine needles.  Magnon is hop forward but at the same time retains a nice balance between the malts and hops.  Then there’s the crazy good head retention.  All in all it’s a must try for the progressive craft beer lover.  Look for Magnon to appear in cans in late spring. In the meantime you should be able to find it on tap in better beer bars around Columbus.