This past week I turned 50 years old.  Not content to spend the rest of my days frequenting restaurants where they give AARP discounts, I decided to do something I’ve been kicking around in my head for a while—undertake a crawl of all six downtown Columbus breweries.  The plan was to first work our way up 4th street, effectively the city’s new brewery district, and then come back down High Street.  On the order of fifty good friends joined in on the adventure, which made it a day to remember. Except of course for the very end when my recollections are pretty hazy.

First off a special shout out to the those people who were there for each and every stop: Tom and Mary Pajor, Ralph Wolfe, Ian and Cindy Pruit, Hannah Shafaat, Ian Krajbich, Tim Stevens, Chris Mercerhill, Josh Goldberger, Anne Co, and my wife Laurinda who did most of the organizing.

To record the event for posterity, express my gratitude to those who braved the harsh weather to celebrate with me, and share a few photos here is a recap of the day.  It’s mostly a self-gratuitous kind of post, but there may be a few useful tidbits of information for those of you contemplating a similar journey.

12:45 pm – I meet up with a subset of my fellow crawlers for the Wolf’s Ridge brunch. Starting on a full stomach is an essential element of any extended brewery crawl, and in this case it’s highly convenient that one of the best brunch spots in the city happens to be a logical place to start the crawl. I order the Cuban Benedict (eggs benedict supercharged with carnitas).  Not only is it delicious, it pairs wonderfully with the beermosa (Wolf’s Ridge Hefeweizen, Lillet, and freshly squeezed OJ).

1:55 pm – I head back to the Wolf’s Ridge taproom where the crawl officially starts.  I order a glass of Clear Sky Daybreak. Their coffee infused cream ale is one of my favorite Columbus beers and a little caffeine to make it through the day can’t hurt.  Josh Davis is the first person to show up (aside from those still finishing brunch in the restaurant).  As the crowd grows I pass out Brewery Crawl Tic Tac Toe Bingo sheets, an idle distraction to give people something to shoot for as they sample beers at each stop.  By the time we leave the group has swelled to about 30 people.

2:45 pm – Time for our first transition of the day, an easy walk across Spring Street to the Elevator taproom, where our arrival probably triples the size of the crowd.  Doug and Laura Oldham are there waiting to join the festivities.  I order a pint of Mogabi Hoppy Wheat, the lone Columbus beer to medal at the GABF this year.  More friends are arriving, including Fred and Mira Lee from Actual Brewing, and Dan Eaton who covers the local beer scene (among other things) for Columbus Business First.  There’s a table reserved with birthday balloons and cupcakes.  I wonder who else is celebrating a birthday today.  It turns out they are for me, duh (thanks Kris). 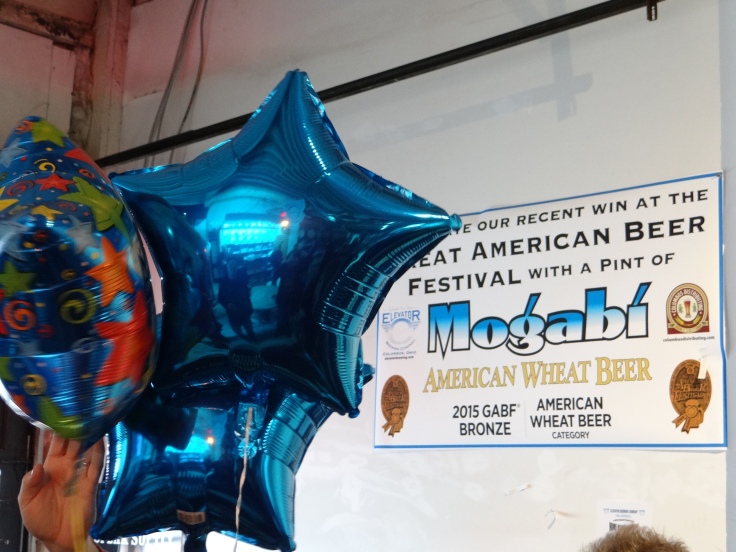 Dick Stevens, owner and patriarch of Elevator, takes Fred, Mira and I into the back to show us the newly resurfaced floors of the brewery.  Apparently brewing is hard on 100 year old concrete and this was a necessary if pricey upgrade.  The shade of bright blue immediately reminds me of Boise State’s football field.  Kris who handles social media for the Elevator (and writes an excellent blog herself called Does it Have Booze) pours me a sample of a new beer called West Coast IPA 2.0. It’s got a very expressive hop nose, good stuff.

3:30 pm – It’s time to move on, we’re already 30 minutes behind my unrealistic schedule.  The next destination is Hoof Hearted Brew Pub.  This is the least walkable stretch of the day, though some people do make the 20+ minute walk up 4th Street.  My oldest son Denver (a 21 year old junior at OSU) has been tagging along to help with transportation and he gives 6 of us a ride, dropping us off before ditching his parents lame party as soon as his presence is not absolutely needed.  Fred and Mira take an über and get there at the same time as us.  Dick and Kris from Elevator decide to join the party.  It seems like this might be my best chance to check off the Sour/Brett beer box on my Bingo sheet so I order a glass of Inflatable Time Machine, a sour IPA that like most of the Hoof Hearted beers throws the style guidelines out the window.

4:00 pm – Angelo Signorino, a man who needs no introduction, arrives and joins the party.  Soon thereafter Trevor Williams drops in for a few minutes.  The crowd has now swelled to somewhere in the vicinity of forty people and things are kicking into high gear.  Dan Eaton buys me a pint of Mom Jeans Milk Stout.  My pacing is starting to slip.  We get a photo of the awesome assemblage of beer cognoscenti, but my camera battery dies before Dan and Laura get in the photo.  I guess I should have charged the battery.

5:00 pm – Time to head up the street to Seventh Son.  The migration of people is pretty chaotic with everyone opting for their own manner of transport.  Laurinda and I end up walking with Dick Stevens and my friend Andrew.  On route the weather takes a turn for the worst.  It seems to be raining, hailing, and snowing all at once.  Drenched, but wide awake, I’m glad to reach the safe haven of Seventh Son.

5:15 pm – Seventh Son is pretty packed.  Not surprisingly no one is using the patios, and there is some kind of bridal shower going on in the back room.  After drying off I find a spot at one of the tables and sit down with my friends Brian and Carrie who have just shown up.  Someone buys me a snifter of their Belgian Quad, Abaddon. In retrospect, my decision to switch over to double digit abv beer may not have been the wisest. Laurinda gets me an order of tacos from the food truck, at least one of us is still making good decisions.

6:15 pm – We head west to North High Brewing.  Not taking chances with the weather we bum a ride from our friends Scott and Tina give who have decided to call it a day at that point.  North High is buzzing when we arrive, but we manage to squeeze in.  Two trays full of sample sized pours of the milk stout and hefeweizen are set out on the standing bar.  This time it’s not for us, there’s some kind of tour coming through a little later.  I get a pint of their David Bowie inspired Stardust to Stardust Imperial IPA.  It’s my first encounter and I’m seriously impressed with this beer.  Gavin Meyers, co-owner of North High, hangs out with us for a few minutes while waiting to entertain the next tour.

7:15 pm – We hop on a southbound #002 bus and head for Barley’s.  Our group outnumbers the other riders and for the next 8 minutes this is the party bus.  Finally we reach our final destination, the newly opened Brewcadia upstairs at Barley’s.  They’ve got an excellent selection of beers on tap, paired with free arcade games.  For the first time since Hoof Hearted there is enough room for our group to congregate comfortably.  My friend Erica buys me a pint of Bodhi, which seems a fitting way to end the day (not that I was smart enough to end there).  I attempt a game of Asteroids, or was it Galaga?  Either way the result is not pretty. Dan Eaton who had said he was only planning to join for a couple of stops is still with the crawl, but checks out a little after 8 pm.  Fred suggests we all get übers and head out to Actual where the beer will flow for free.  It seems like an awesome idea to my ethanol soaked brain, but the logistics of moving a crowd this size are far beyond us at this point in the night.

9:30 pm – Ted Clark who was on the crawl for the first three stops before mysteriously disappearing has rejoined the group. He is kind enough to give us a ride home before things go completely south.

That’s a wrap on an amazing day.  Thanks so much to everyone who came out to celebrate with me.  It will be a tough birthday celebration to top.  If you are planning a similar event I would recommend allocating at least 45 minutes at each brewery, and a good 15 minutes for every transfer except for the Wolf’s Ridge to Elevator journey.  If the weather is good transportation is not a big issue.  The High Street buses are very convenient for the last leg of the trip, and an über from Elevator to Hoof Hearted costs less than a pint of beer.