Today the Ohio State Buckeyes and Michigan Wolverines will square off on the gridiron for the 113th time.  What pairs better with the granddaddy of football rivalry games than a tasty craft beer, but for those who bleed scarlet and gray, not just any beer will do for today’s game.  Fortunately, there are several locally brewed choices for the discerning beer loving Buckeye fanatic.  Elevator’s Bleeding Buckeye is perhaps the longest running Buckeye themed beer.  Those looking for something a little stronger might want to head down to Barley’s, where they tap a keg of the highly sought after Bourbon Meyer Buckeye Stout on gamedays.  A Buckeye-themed beer that many of you may not have considered is Land Grant’s Skull Session Crimson Lager, which made its debut last week.  In celebration of The Game I thought it would be appropriate to review the newest kid on the block.

For those not in the know the skull session is a pregame performance of the OSU Marching Band held prior to each home game.  The tradition dates back to 1957 when the band’s pre-game rehearsal became popular enough to merit opening it up to the public.  These days thousands of fans flock to St. John arena on football Saturday’s to hear the band perform. The beer of the same name features a skeletal trumpet section on a scarlet tinged label.  The beer is described this way on the can:

This light drinking malt forward scarlet lager owes a tip of its cap to a timeless autumn tradition.  A chance to clear your mind before Saturday’s main event.  This beer draws its ruddy hue from Vienna and amber caramel malts, and its mostly traditional hop profile of Perle and Tettnang gets a dash of American flare via the addition of Cascade.  This a beer that’s in formation, and ready to march.

With a deep copper color and two fingers of creamy head, Skull Session is a handsome beer.  When held up to the light the exceptional clarity of the darkish beer is revealed. The nose offers up notes of toffee and biscuity malts.  The taste is malt-forward with flavors of bread and caramel at the fore.  The German Perle and Tettnang hops emerge near the finish to balance out the malt sweetness and add their own distinctive spiciness.  The expected floral, citrus notes of the Cascade hops are too far in the background for me to pick them out, but those with more discerning palates may be able to find them.

I was curious to see what the improvised Scarlett Lager style was all about.  Based on the name alone I thought it might be something akin to an Irish red ale, but the ingredients and taste leave little doubt that Skull Session is really a Festbier (the style served at Oktoberfest) in Buckeye clothing.  While there’s no denying this is a malt-forward beer I find myself really digging the spicy German hops, which are a little more assertive than you might expect for this style.  This is not a beer brewed for deep contemplation, but as I finish the last drink of my glass at 9 am on gameday I can say with absolute conviction that I’m looking forward to having another.  I think that is in keeping with what the brewers intended.  Go Bucks! 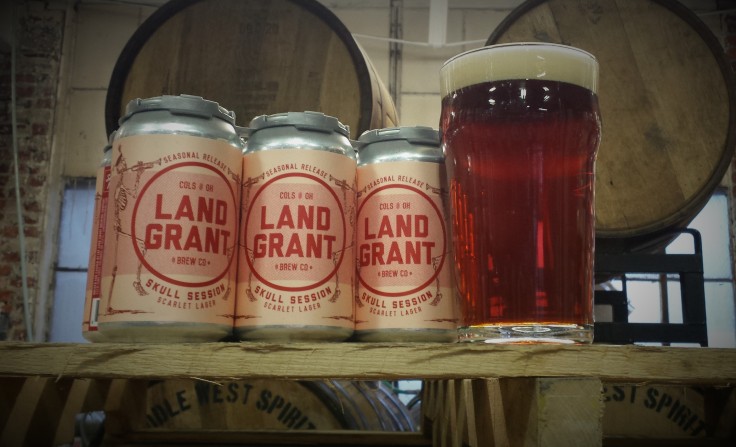