With only two weeks to go until the big day it’s about time to start thinking about Christmas shopping.  I know there are probably some type A personalities out there who have already started Christmas shopping, but even the most organized probably have some stocking stuffers left to pick up.  So if you have a beer geek lover on your shopping list but couldn’t tell the difference between a gose and gueuze I’m here to help with beer-themed gifts for any budget.  Without further delay here are my suggested gifts for the 12 days of Christmas.  Follow the hyperlinks to get more information on each gift.

What self-respecting parent wouldn’t want to instill a profound love of beer in their young child?  If you are worried that a porter-infused pacifier might earn you a visit from “the authorities”, how about a copy of Goodnight Brew .

Is a tight budget limiting your Christmas shopping options?  I’m here to help you with some no cost stocking stuffers for the beer lover.  Print out one or more of my beer-themed crossword puzzles on fancy paper of your choice, and voilà.  Keep the solutions for yourself and your perceived beer IQ could skyrocket when the recipient gets stuck trying to identify the IPA named after a fish with poisonous spikes or the Columbus beer whose name means enlightenment.

Is your challenging gift recipient covered in facial hair?  Does the aforementioned facial hair tend to end up a bit crusty from overzealous quaffing of oatmeal stouts and English barleywines?  If you answered yes to both questions I’ve got the perfect Ohio-centric beer-themed gift for you.  Why not try one of the hop-infused products from Cleveland Beer Blogger Bob Lesher’s Beerded Beard Company. You can choose from beard balm, beard oil, or lip balm all of which are infused with your choice of one of seven hop varieties (Citra, Centennial, Columbus, Cascade, Fuggle, Saaz, or Tettnang).  Go all out and get deluxe package of all three products for $30. 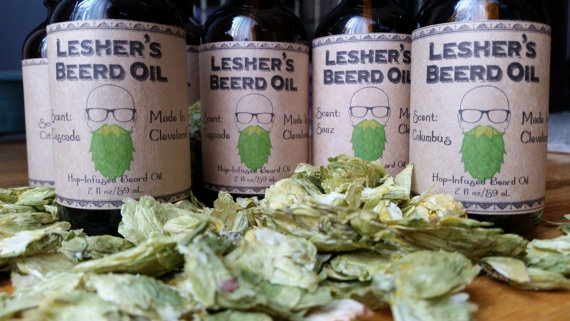 There is nothing that beats drinking a beer, but drinking beer all day is not ideal for your health, relationship, or job security.  For those hours when you can’t be experiencing beer first hand, why not while away your time reading about beer.  Here are some great choices:

Last year the specially designed IPA glasses from Spiegelau were all the rage.  I now have three of them and they get more use than any glasses in my collection (and yes the glass does matter).  This year a glass specially designed for stouts is the new kid on the block.  Although I don’t yet own a set myself (I hope that will change on Christmas) I’ve heard they work great on IPAs as well.  So skip straight to the latest scientific advance in glassware.

The only thing that says class better than a 750 mL bottle of local beer is a set of three. Among the Central Ohio breweries who bottle their beer here are my recommendations (you can access a review of many of these beers by clicking on its name).  To find these beers I’d recommend you visit the brewery itself, Weiland’s Market, or use beermenus.com to track these beers down.

Actual Brewing – Conductor Imperial Rye is one of my favorite local beers, so let’s take it one step further and start with a bottle of the Barrel Aged Conductor. Next up is Fat Julian Imperial Stout, after all how can you go wrong with a beer meant to taste like leathery elephants dipped in dark chocolate.  Let’s finish with Orthodox Winter IPA, a beer that combines generous helpings of IPA-like hops and Porter-like malts to fight off the winter chill.

Sideswipe Brewing – Small in size but big on quality, their lineup is not very big, but it’s enough to allow you to cover the bases of malty, yeasty, and hoppy.  Let’s begin with my personal favorite, Coop Looter Saison, a yeast-forward Belgian farmhouse ale that beat out 31 Ohio beers to be crowned champion of the Ohio Beercast Fantasy Beer League.  Next we add Fisticuffs IPA, everything you want in a west coast IPA with hops that scream pineapple and citrus fruits. It’s guaranteed to fight off a case of mid-winter scurvy.  Finish the set with Elegant Hoodlum Smoked Stout, a unique and complex sipper just right for the dark days of winter.

Rockmill Brewing – This farmhouse brewery located near Lancaster uses well water with mineral content that is purported to mirror the water that Wallonian brewers use to brew elegant Belgian ales.  Their Dubbel, a beer spilling over with dark fruit flavors and rich malts, is one of the best dubbel’s brewed outside of an abbey.  The Cask Aged Trippel is a fruity golden ale made in the Trappist tradition and then aged in whiskey barrels from Middle West Spirits (if you are whiskey-averse you can get the non-barrel aged version).  Complete the set with one of their Saison’s.  The Saison Super finished above all other Ohio brewed beers in my Saison blind taste test this summer and would be my first choice.

A majority of the local breweries don’t bottle or can their beers, including several that put out awesome beer.  If the target of your affections is a fan of Hoof Hearted, Wolf’s Ridge, Barley’s, Zaftig, or Zauber (among others) you’ll need to go with a gift certificate to one of the awesome growler shops around town.  Three that get my business and endorsement are:

Ohio Taproom – Serving exclusively Ohio beers, including several that are hard to find anywhere else in Columbus, a visit to the Ohio Taproom in Grandview (1291 W. 3rd Avenue) is always a treat.

Daily Growler – Offering what is arguably the largest selection of any growler shop in the city, including a very solid lineup of Ohio beers.  You can’t go wrong with a visit to either of the Daily Growler locations (2812 Fishinger Road in Upper Arlington or 258 W. Olentangy Street in Powell).

Growl! – Located on in Clintonville (2995 N. High Street) not far from my humble abode, Growl! is the only growler shop in town featuring a punctuation symbol in its name.  They offer good selection, a nice atmosphere, and boutique wines if you want to branch out to other fermented alcoholic beverages.

If your beer lover lives in the Columbus area, it’s hard to beat a Columbus Brew Adventures Tour. There are various tours most of which involve visits to four Columbus area breweries.  You’ll start off with some tasty appetizers and then start sampling some of the best beer Columbus has to offer.  Host Jim Ellison drives you around in a big ass climate controlled van while regaling you with tidbits of information on the local brewing scene.  Best of all at each stop you meet the brewers and hear what they have to say about their creations.  For an inside look check out my post from this past summer entitled, My Columbus Brew Adventure, where I give a first person account of one of these tours.

Day 9: Tickets to the Grandview High Gravity Hullabaloo ($60 per person)

Last year the shopping days were running out and I was struggling to find a gift for my wife.  If you think this story ends with me getting her tickets to a beer festival and we all lived happily ever after you considerably overestimate my charm.  However, I did score major kudos for buying her season tickets for the “Broadway in Columbus” series of shows.  In a hypothetical world where our places were reversed she could get an equally effusive reaction from me by purchasing one of the limited tickets to the February 7th Grandview High Gravity Hullabaloo, a celebration of Ohio-brewed strong beers and smoked meats.  (Editors note: The odds of my wife willingly buying me a ticket to attend a high abv beer festival are comparable to Indiana winning the Big 10 football championship.) 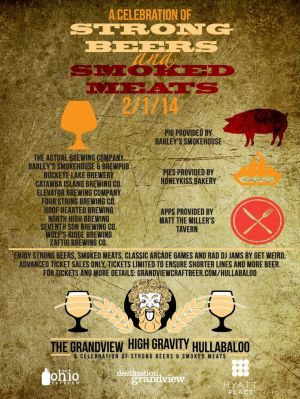 At some point in the progression of your average beer enthusiast drinking beer is not enough.  A strong urge to explore the effects of caramelized malt and dry hopping emerges, and brewing beer is the only way to quell the thirst for knowledge.  Sticking with the buy local theme I would suggest you head over to the Winemaker’s shop in Clintonville (3517 N. High Street) for some personalized advice in getting the appropriate kit for the budding brewer in the family. Established in 1974 when homebrewing was still illegal, Columbus brewing icon Scott Francis and his family have been peddling hops, malts and carboys for longer than the average craft beer enthusiast has been alive.

If you give someone close to you a homebrew kit it means that you will likely be expected to drink the brewing output of the aforementioned loved one.  If you aren’t completely sold on their skills in the zymurgical arts maybe it would be better to get them a gift certificate to North High Brewing, where they can make a keg full of beer following an established recipe with appropriate equipment and the guidance of someone who knows what they are doing.   Gavin Meyers and crew at North High have an awesome setting for brewing your own beer while drinking pints of beer made by one of Columbus’ up and coming breweries.

The final gift suggestion is neither local nor cheap but if you want to give an unforgettable gift let me suggest the Funky Buddha Craft Beer cruise.  This Florida brewery best known for its Maple Bacon Coffee Porter has organized a cruise that involves 24 hour exposure to craft beer.  The March cruise is 4 days and 4 nights in the Caribbean, with stops in the Bahamas and Key West.  If you secretly want to lounge in the sun by the pool, but your significant other keeps dragging you to industrial sites with bad furniture, this could be your ticket out.